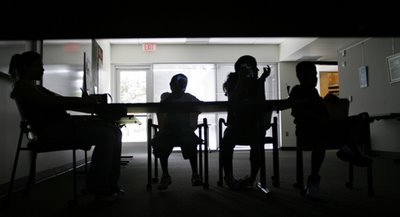 Thao Nguyen AMERICAN-STATESMAN 08/02/06
(left to right) Michelle Loesch, 14, Joe Riojas, 10, Cindy Soto, 14, and Edgar Reyes, 11 played a game of Harry Potter Jeopardy on Wednesday afternoon at the Terrazas Branch of the Austin Public Library. The event was planned as a peview to the Harry and the Potters rock concert on August 10 at the Wooldridge Square Park from 6-8 p.m. In October last year the show brought in about 300 people according to the library.