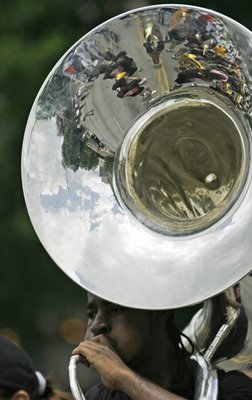 Thao Nguyen AMERICAN-STATESMAN 06/16/06
Mychal Gadison (cq),17 from the Austin All Star Band plays his Tuba on the Congress bridge. Bands from other states such as Louisiana and Mississippi also traveled to Austin to participate in the Juneteenth parade down Congress at 2 p.m. 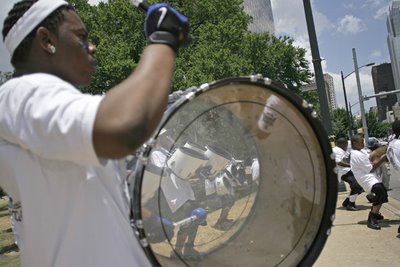 Thao Nguyen AMERICAN-STATESMAN 06/16/06
Willis Bowens, 16 of the Jackson Mississippi All Star Band plays the bass drum during the Juneteenth parade down Congress at 2 p.m. His band is joined by bands from Houston, Mississippi, Louisiana and other cities to make up nine bands that will compete later on in the day at the Alvin Patterson Juneteenth Battle of the Bands and Drumline Competition at Nelson Athletic stadium.