What an experience… I end up in a part of town where, apparently the police is really strict and will pretty much toss you in jail… well my call was out there and pretty much thats the entrance to the field below…. a couple hundred yards to the left is where the shooting occured. I shoulda done a bit more reporting… then my captions wouldn’t suck so much… I was more in a state of ahh I gotta get this pic! But the story is that this guy was being pulled over for a traffic violation but he never pulled over and eventually led them to a corn field after another attempt at pulling him over. Then he pulled out a gun and was shot by the sheriff’s deputy. Thank you Rebecca and Kelly West for helping out of that maze of a place… eek scary! 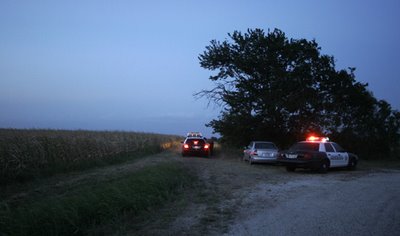 Thao Nguyen AMERICAN-STATESMAN 06/16/06
Police and troopers tape off the entrance to a road that led to a chase and fatality that occurred during the evening in Williamson County.