Hmmm woke up this morn and went to try to shoot some portraits before school started, but at 8ish in the morn the guys are still setting up and not ready for me yet. So I told the few people I wanted to do a portrait on that I’d be back tomorrow later in the day. Today in class Virga sent us out into the London to bring back a picture of a double decker bus for Thurs. I didn’t get quite the picture that I wanted so I’m gonna try again tomorrow. While out shooting I came across a rather large building… and that would be Big Ben. Not such a photojournalism type picture but rather a touristy one… well hopefully tomorrow it will be much more photoj… at least 2 pics…

Sergio Larrain. First of all he shot PORTOBELLO ROAD in 1956!!! It was great looking at those pics! He had some pictures of animals and window and mirror reflections, which of course I truely enjoyed. What I think I learned most from him was that taking pictures of places and people during a time will of course make so much more of a difference 20-30 years down the line. It also makes me regret not taking pictures of home (texas) because it is already changing more that I’ll know. A whole shopping strip is already runnning parallel to the main road… it used to be pure green grass, now its just cement and cinderblocks. When I get home… I’m being more of a tourist, or rather I’m gonna explore my neighborhood, I definitely take it for granted sometimes! 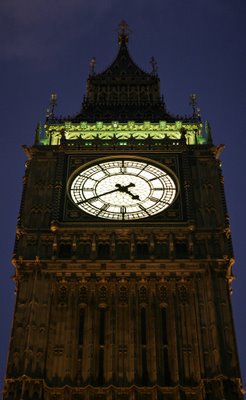 A rather uncreative picture of Big Ben.

Tomorrow I promise will be better!