Venting on the unjust society of America… So I’m tired of seeing this stuff and just sitting back. I had to write a paper on a lecture review and in it I realized that there are things just because I am Asian that I am already at a disadvantage. “So now I’m not gonna sit quietly… or rather type quietly. I really do want to make a difference. Starting with… at the Daily Orange, the student run paper here, there is a comic called “Agent Orange”, which is what I can get from it a comic about cell phones.

For many people out there who don’t know, Agent Orange (a link that spares you from the images) was a defoliant used by the US military to kill trees so that they can destroy hiding places for the enemy during the Vietnam War. They used it for 10 years, 61′ to 71′ and then realized that it was harmful to humans.

To this day, 3rd generation kids are still feeling the effects of the toxin. Disfiguration, missing body parts, mental retardation, cancers and much more… and the kicker of couse is that the USA refuses to pay any compensation to the millions of Vietnamese people who they have exposed to the “most toxic chemical discovered so far. There many many more issues that I could name off the top of my head… but doubting that anyone really reads this I will spare you.

Philip Jones Griffiths. Again because he did a story on Agent Orange. Very powerful images, I highly suggest you look at them. 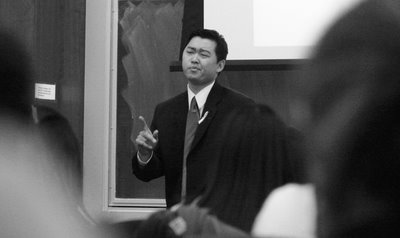 Amnat Hong-Chittaphong was a member of ASIA and was here during the Denny’s incident… if you dont know about it… look it up.