Today. Lets see, today was spent mostly organizing my 20 image portfolio for the end of the semester. Most of it probably consisted of images that I shot from up to 2 weeks ago. When I did finally get out of the house I went to Covent Garden in search of Santa Claus and search the grounds as I may, I never found the jolly ole man. Then off I went to Trafalgar Square to see some snowboarding. Too bad I never realized that you had to book in advance. So instead I decided to shoot the outside of the event. They had a thing where you had to book in advance online and then they would raffle the tickets by mobile phones. Quite a different concept, but they’ve probably been doing it for a while.

Eli Reed. Looking at his work on “Black America” makes me actually want to do something of a similar nature, only with Asian or Vietnamese Americans. That would be interesting to see how life is lived. I know how my life as a Vietnamese-American works but since I don’t really know many other Asians I don’t know if what I do is common or just something that happens in my household. Possible new project idea. 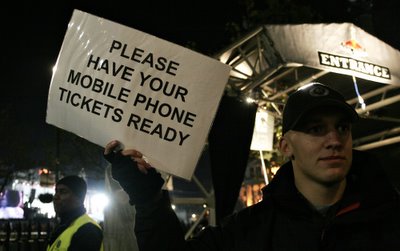 Snowboarding event…. hard to tell from where I stood!