Didn’t do too much today. Printed out 5 in copies of my pictures from the semester. I really need to get cracking on my photo story! Shot a tree lighting in Trafalgar Square. Didn’t really get too much out of it. Went to dinner with some Spanish boys that Erika had met. Shot a bit there, nothing too grand. Oh we got into a conversation (actually I’m more of an observer!) about a little part of town in Spain that was known for homosexuality. Where the men sit outside drinking their beers, speciality shops as in clothes, clubs and even food. (sexual shaped food that is) What are my first thoughts on this… how freaking awesome and that would make for such a fun photo story!

Bruce Davidson. Saw his pictures in a Magnum photo book at school. I enjoyed his pictures and I think that it is convenient because he lived in such a place as NYC and documented just everything that seems to be taken for granted. The subway and Central Park were such fun refreshing pictures. I know that when I get back to Texas, I am on a mission to capture what it is that is Texas! I have lived there all my life and cannot show you a picture that I’ve shot that really says Texas. I’m excited! 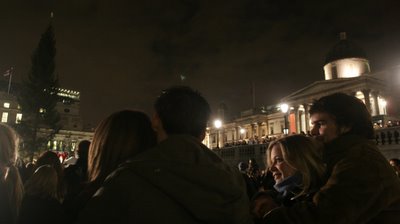 Tree lighting! (the tree is hiding on the left!)