Photo has been a bit slow for me this week. I’m pretty much getting used to driving a stick shift, so yay! Still stall a bit but not soo bad. The next planned photoj event is… I’ll be following a Post Standard photographer this Saturday, so YAY! Oh and then next Saturday, they’ll unleash me to the shooting externing world!

So I decided that I want to write my sociology paper on what picture runs on the front page. Tessa brought it up, for example, would a newspaper say hey yeah we’ll run a picture of a black child building a snowman with the first drop of snow in a predominately populated city… in a mixed city? Would they think that it was good because hey its a good weather feature photo. Would they say no we can’t do that because it would make it a race issue or would it be hey more diversity for our paper? Do some photographers go into a place and try to find that one aspect that could make the paper diverse?

I personally shoot what catches my eyes… race isn’t an issue for me.

Anonymous said… You must get fucked by a lot of white dudes.
Another issue on race… ok I really wasn’t going to say anything about it but I guess I am going to… so what does this mean, is it simply because I am Asian? The comment above was posted 2 entries ago, this blog more or less is fully about photo, so why does that play a part? And I realized (relating to my issue above) that almost all of my photographs are of white people… except for my sister. So does this play any part in newspaper fronts? The areas that I mostly live in are predominately white… or Hispanic….

I could go on and on forever… but I won’t. Oh and thank you to whoever retaliated for me.

UPI photo exhibit. Wow speaking of which, I just found this exhibit that reviews pictures in the past about how they racially stereotype people. “Edward Steichen, Dorothea Lange, Ansel Adams, Man Ray, Edward Weston, Walker Evans, and Margaret Bourke-White,” are some of the bigger named photographers in a gallery of 300 photographs… Anyone wanna road trip up to NYC? 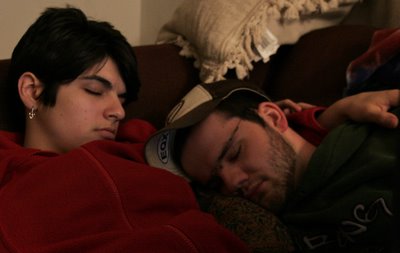 Right after dinner, this was my roommate and her fiancee, it was a cute moment that I couldn’t pass up, we were in a quiet little social circle gathering… had my camera and caught one shot before they woke up to my shutter!