Watching “Henri Cartier-Bresson: The Impassioned Eye” with the girls.
Just a random feature that I found feature hunting… nothing wow about it, but yeah isn’t it awesome that RunTex puts up coolers for all the runners, such nice peeps! 🙂 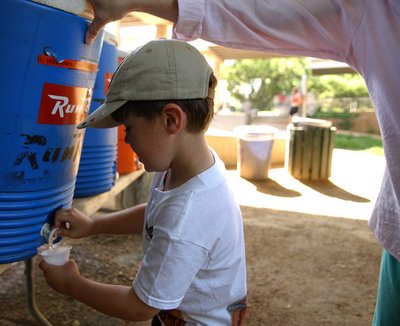 Thao Nguyen AMERICAN-STATESMAN 06/05/06
John Henry Glassford, 6 of San Angelo takes a drink of water from the coolers set up by RunTex during an outing with his mother, Michele (cq) and his 9-year-old sister Rachel. The Glassford family’s bicycle ride started on Congress as they were making their way to Deep Eddy Pool. Glassford’s husband recieved a grant from LBJ Library for a month to research in Austin and while the Glassford family take time off to explore the new area. Today was their first morning out in Austin.