Sent off my package to The Philadelphia Inquirer. I think the post lady misunderstood me when I said that I needed it there by Tuesday. Lets hope it makes it. Didn’t really shoot today like I wanted to… Although I did shoot these two guys who were signing to eachother on the tube. I wrote on my notepad asking to shoot them and got a thumbs up. Didn’t get a great picture but the experience was something I hadn’t experienced before. It was kinda fun asking for information from them by writing it down and passing the notepad back and forth. 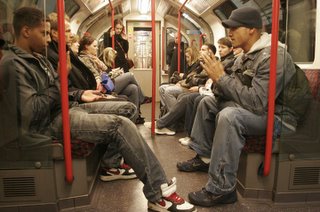 Went to a discussion at The Frontline Club. The club is for journalist, cameramen and photographers, it has a restaurant downstairs as well. They had a discussion on “Is anyone taking notice?” a few things I wrote down….
-a picture is never worth your life, its the evidence you leave behind
-photos are a record of history, they make people aware… Rwanda.
-Leading cause of death for photographers-Murder.
-a really good point that Philip Jones Griffiths mentions… covering the war through the mass of people who actually make the bombs and weapons that are used.
-it seems like the population in America would say, “look at what these blacks do to eachother,” as said during the discussion about how if a picture ran in the American press about fighting in Africa.
-Lack of photojournalist in America?
-Images can be dangerous as well as powerful.
-If 1 person responds your job is done
-“Don’t discover things by reading, you discover things by being there.” -Philip Jones Griffiths

And the sad part of my night… after the discussion Philip Jones Griffiths shakes my hand and tells me he has seen me before. I would have no clue because I don’t know about photographers and their work. I’m ashamed. So in this sense I’m going to feature a different photographer everyday. (everyday that I post; aside from my daily pictures… I will post a new picture everyday… even if it’s not great, it will be inspiration to for me to make sure that I have an awesome picture every day!)

My reasoning… every since I was little, the only bits and pieces of photojournalism that I knew were what I looked up. I never had a class, until this semester that focused on photojournalism. Henri Cartier-Bresson. I didn’t know who he was when I started college. In my lifetime photography was not an important factor in my education in Texas. The school system cease to even acknowledge the existence of journalism as a whole. The chance starts today for me.

My first is going to be Larry Burrows. I’ve seen his pictures before but never really actually looked at them until I walked into a bookstore in London. I couldn’t put the book down and now own it. I don’t know what it is that captivates me… maybe it hits close to home because my parents have told me about their experiences during that time. Seeing pictures of the Vietnamese villages, the Vietcong and just getting a feel of what it must have been like to be in Vietnam during the war is something that I am grateful for.
Larry Burrows worked for Life Magazine and died while shooting the war. He covered the conflict in Vietnam from 1962 until 1971 where he was shot down from a helicopter while photographing.

Philip Jones Griffiths. A magnum photographer. He extensively shot Vietnam. I’m really sad that I didn’t spend more of my time talking to him. His work is amazing. As I have said before, the pictures of Vietnam are really important. In history as well as just what they mean to me. After looking at his pictures I really regret not asking him alot more questions. Currently trying to find the next time he will be attending a public event… because I have so much I want to say and so much I want to ask him.