Today was my touristy fun day. Went to Abbey Road, shot a guy signing the wall for John Lennon’s anniversary death. Then off we went to find the Steve McCurry exhibit… sorry Drew got us a lil lost! Then we missed the last 159 routemaster bus… shucks… after that off I went to shoot the mayor! 🙂 Then off I went to the end of the year semester party, twas alrite… then off to a pub for a lil pint.

Clay Patrick McBride. Yay portraits… actually this will be helpful since I have a couple of friends back home that are in a band that want portraits! 🙂 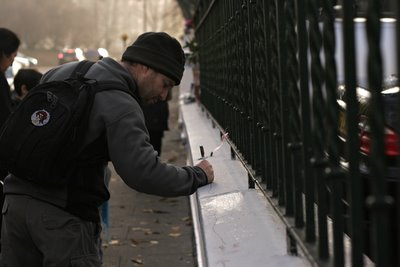 During his weeklong stay in London with his family, Kirk Anderson takes some time to visit Abbey Road and pay tribute to John Lennon as he signs the wall outside of the recording studio. Anderson and his family are living in Madrid for what he calls a “Sabbatical year” away from their hometown of Arizona. Yesterday was the 25th anniversary of Lennon’s death. 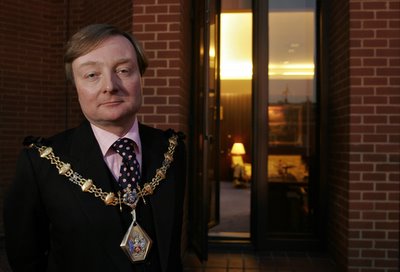 Mayor Warwick Lightfoot stands outside on the balcony of the Royal Parlor room at the town hall in Kensington. Lightfoot was elected mayor last May and will remain the mayor for the Royal Borough of Kensington and Chelsea for a year. The Borough is one of eight Royal Boroughs in the area. If a member of the royal family wished to visit the Royal Borough of Kensington or Chelsea, it would be Lightfoot’s job to oversee their stay. Although he has no real official duties as mayor, he does attend hundreds of events in the borough as well as surrounding neighborhoods; all this is an addition to his original job as an economist. 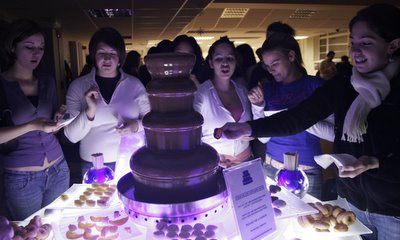 Students attending the end of the semester party at Syracuse University London Program enjoy the chocolate fountain provided by the school for the first time.